I was looking forward to this one. The IWF boasts the second largest prize pool of the calendar year and with good runs at the title the previous two years, I was confident entering the tournament.

My plan was to arrive late to the Burlington on Friday night and get a good night kip. I checked in at ten and was in the bar at 10.05. Wally told me he'd been playing cash all night and asked could he use the spare bed in my room for a kip the following morning. I got to bed about five, Wally woke me about 7.30 carrying a bag that suggested he intended to stay longer than the original nap time requested.

I started the game a little hung-over and a lot jaded, after my two and a half hours kip. My starting table had Derek Murray, Pauric (Digiman on IPB) and a decent American player who recently won the UKIPT Scotland.

The first two levels were just feeling out the table. In level three I lost a few chips to Pauric, trapping

into his turned flush. There was a decent enough Latvian player on the table whom I got a very lucky double from playing about 12k.

He had call numerous three-bets showing up with hands like Q8, so I wasn't that worried when he called mine while I was holding Queens. I got very worried when we got it in on the Jack high two-club flop, with him holding top set. I picked up a flushdraw on the turn and rivered a Queen.

The rest of the day went very well. I gradually grew my stack all day without playing any big pot or ever being in danger of going out, eventually finishing with

It had been a very long twelve-hour day's poker, so I decided to skip a post play drink and retired to my room for that over due good night sleep but I hadn't factored in Wally. I was awoken from a coma state about six, as he had decided to watch the Malaysian Grand Prix at full volume.

Back to the tables and not as refreshed as I hoped, the first two hours were spent protecting my stack, as I wasn't finding any hands. When I eventually found AK I got it in with a shorter stacks

. The Queen on the river was unfortunate. It meant the difference of having 50 or 25 big blinds nearing the period, where people are thinking of making the cash.

I did chip back my losses in the hand fast enough, by upping my aggression but was out soon. While playing something between 70-80k, I raised the small blind and Funkymonk from IPB over shoved from the big. I more or less snapped with

and lost to his Tens.

I'm sure my hand played well against his pushing range and if I had known his hand, I think I would have taken the race anyway. The implied advantage of getting my hands on 150k in chips, twenty-five from the money in a tournament with a huge amount of satellite winners is fairly massive.

I was unlucky not to get a draw out of the tournament in the end, as I had backed eventual third, Tom "The Bomb" Finnernan at 50/1. Tom's a top player but couldn't catch a break on the final table, having entered it 4/1 favourite to take it down. It was still a great and well deserved result for Tom.

The weekend wasn't a total washout, as I was lucky enough to back Jonathan Byrd in the PGA event in Las Vegas at 60/1. It was some buzz seeing him get a hole in one to wrap it up on the fourth play off hole.

I'll spare everyone the story of Wally waking me up at six that morning.
Posted by nicnicnic at 2:20 AM 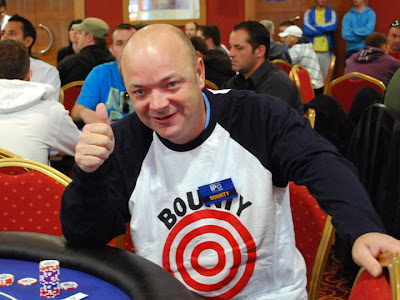 Firstly, a big well done to Lisa, Ciaran, Jerry, everyone else at Boylepoker and Poker Ireland for yet again producing the biggest poker tournament of the year outside of Las Vegas.

I can only imagine the amount of work that goes into pulling off the IPO, but pull it off they did and what a great weekend it was again!

I played golf with the usual suspects (Paul, Marty and Julian) in the K Club on the Wednesday and Thursday before the event. Honours were split but if you saw the trashing Marty and myself got on day one, you wouldn't have backed us at 10/1 to recoup our losses on day two.

We headed to the Regency on Thursday evening and were settled in at the bar for the Montpelier rugby game. Marty said he was going in heavy on them to cover the handicap earlier in the day. I had a grand on and while I shouldn't say Marty's bet, it was 10x mine anyway.

Five minutes into the match, Marty came out with this gem of a question. Are Montpelier in the blue or grey? Something he probably should know, with a five-figure wager involved you'd think.

Montpelier, in the blue, won handily and the rest of the night was spent enjoying a relaxing few drinks.

I really enjoyed the whole tournament. I had a very pleasant starting table and the whole room seemed to be enjoying the game. I never really got going and just before dinner I ran Queens into Aces, which left me with five blinds. I needed to get these in before the blinds hit me and unfortunately I ran my J4os into Kings.

I did, however, last long enough to get a few quid from Mr Smyth in a last longer

Over the rest of the weekend I did three stints of commentating for the live stream, got two rounds of golf in and many more rounds of drinks.

It really was a hugely enjoyable weekend. Mickey May summed it up late in the bar on the Sunday night when she said, "The atmosphere at the IPO is something special, it's the people's tournament".
Posted by nicnicnic at 11:45 AM

It was back to Killarney last weekend for the 250k guaranteed €500 game. There were rumours of large wagers between Connie and Fintan Gavin on whether this one would get a bigger field then the UKIPT Dublin.

When I was a child, one of the earliest doctrines my father taught me was never to bet with a cute Kerrymen and sure enough Connie scooped that bet with 633 turning out. This number is slightly down on previous years but still a great achievement to produce that size of field.

A golf day was arranged on Killeen for Thursday and yours truly scooped the first prize of €200 into my Ladbrokes account with 35pts. I love that course, it really is something else.

The danger of going to these festivals a day early is inevitably you end up on the lash. You can have the best intentions in the world but meeting up with everyone generally leads to a few beers.

The result of Thursday night meant I entered the tournament a little hung-over. This isn't the worst anti-spew mechanism in the world, as I'll usually start a little tighter in that condition.

I was plodding along grand and had added 66% to my

15k starting when in the final hand before dinner, I got dealt the Kings. The big blind was dealt Aces and after the usual raising procedure we got it in and I was lucky enough to bink a straight on the river, thus adding his

I got off to a great start on day two when I flopped gin-holding 33 on a 773 board and managed to get the full double through from an over-pair. This table broke soon enough and I ran pretty well on my new table.

I won a massive pot with

a few hours into the day. I had 4-bet my opponent recently enough and he must have felt I was bullying him when he shoved the

over me when I did it again. Understandable enough, but I had Aces the first time I did it.

I was playing about

180k now with average around the 50 mark, so a massive stack. Unfortunately that was as good as it got. On a new table not much went right for me and eventually I ran Queens into Aces about a dozen off the money for my last

90k with the blinds at

That's three of the last four major events I've played in Ireland where I've amassed a super stack midway though day two and haven't converted to even a min cash.

It's all very depressing really but you get plenty of time to mull over things on the drive home from Kerry and my conclusion is I didn't do a single thing wrong, it just went against me. At least I'm getting my hands on chips and if I keep doing that a conversion isn't far off.

Big well done to Marty Smyth and John O'Shea on their great performances in London for the EPT, it was getting very exciting following the updates and great to see both hit the money.

Posted by nicnicnic at 1:28 AM